You are here: Home / failure / Can a Corrupt Throne be Allied with God?

Full disclosure: be prepared to be angry, for this is the type of post that is likely to tick off many of my subscribers. 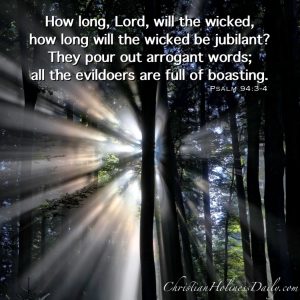 Psalm 94, as we saw earlier in the week, reminds us that it is because of God’s unfailing love that He catches us when we fall. The psalm also reminds us that God will punish the wicked in the end… wicked of all stripes.

My political journey through life may be summed up best by Winston Churchill, who said:

As a young man, I was indeed an idealist who embraced both liberal social plans for the poor, homeless, and needy and Reagan’s moral majority. I was very much an oddball. Later in life, I considered myself a conservative, albeit a compassionate conservative. Today, I am still a compassionate conservative, but I am sorry I ever identified myself with either party. Both the left and the right seem driven by the wicked. Psalm 94 (and other passages) seems to agree.

The psalm reminds us that wickedness is wickedness, no matter who embraces it. Left and Right, Democrat and Republican, Conservative and Liberal all embrace principles and platforms that are contrary to God’s Word.

I will pause while you look it up.

If you read first on verses 4-6, we will see the focus of this blog.

They pour out arrogant words;
all the evildoers are full of boasting.
They crush your people, Lord;
they oppress your inheritance.
They slay the widow and the foreigner;
they murder the fatherless.

Few boast more than politicians. While that has always been true, it is only of late that they boast in their evil-doings, such as preying on women, killing unborn babies, and speculating that the mother and doctor together can decide whether to let a newborn die. …They are full of boasting …They murder the fatherless (What better way to describe abortion?).

Those who claim to lead our nation are heartless and cold. Because the nuclear family has been purposely destabilized and devalued, leaders have lost all sense of compassion and respect for any family. They prey on the helpless, weak, poor, and needy. They prey on traditional Judaeo-Christian families, emasculating fathers and replacing his authority with the power of the state. They make the school system mothers to our children and destroy the confidence and ability of the biological mother. If they could, they would remove all children from their mothers and let the state raise them. They prey on families who come across the border. They have destroyed minority families. They lift up as example and heap praise on unconventional families, especially those with gay parents or transgender children. …They slay the widow and the foreigner… They oppress your inheritance.

Most of those whom we call national leaders or representatives merely feign a weak affinity for Christianity; few are sold out disciples of Jesus. Interested only in quieting the outcry of the richest donors or most powerful constituents, our political leaders implement codes that stomp on the rights of Christians to hire only persons who maintain the Christian values that the organization represents, and take away the right to refuse to boycott those people or companies that are found to be morally reprehensible. As Christians, we can no longer preach the unabridged Word of God without worrying about breaking the law. We are not allowed to raise or own children to be morally sound because the school systems preach and teach an amoral gospel of their own.  …They crush your people, Lord.

Who are “They?” The left. The right. Those who are in power who would rather boast of their evil-doings than lead us in a morally upright direction.

Verse 20: Can a corrupt throne be allied with you – a throne that brings on misery by its decrees?

Feel free to be angry at me.